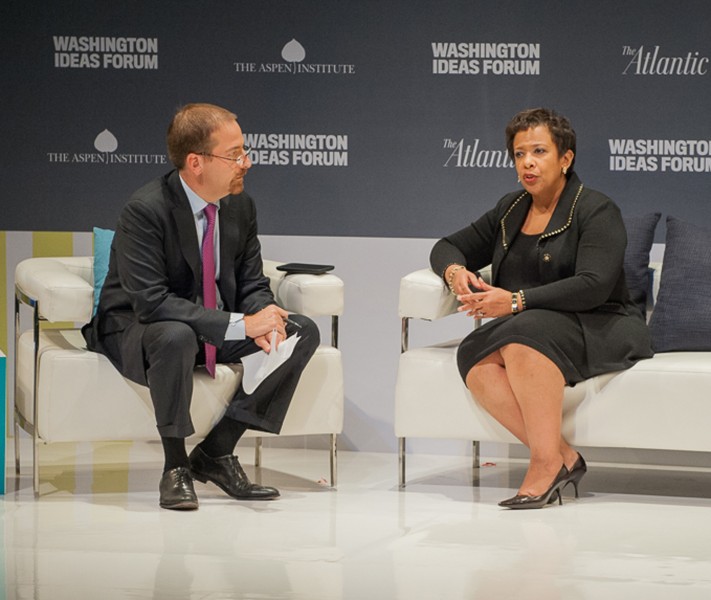 “She’s the only lawyer in America who battles monsters and drug lords and terrorists, and still has a reputation for being a charming people-person.”

This is how Meet the Press moderator Chuck Todd, paraphrasing President Obama, recently introduced current US Attorney General Loretta Lynch at the 2015 Washington Ideas Forum (WIF). And it’s true: Since assuming office less than six months ago, Lynch has battled many monsters, including FIFA executives and BP officials. Her latest opponent? Recidivism rates.

In a sit-down with Todd, Lynch outlined the barriers to recidivism reform. She emphasized the importance of zip codes in the reoffending equation, noting “where you live matters, because of your access to services, education and a certain quality of life.” When Todd suggested relocation as a recidivism solution—citing a social study on Hurricane Katrina, which found that prisoners from New Orleans’ 9th Ward who moved to different states following the storm were half as likely to reoffend—Lynch firmly disagreed: “Our goal is not to move people from their neighborhoods. Our goal is to strengthen neighborhoods to support people coming back into them.”

Lynch also noted the role contentious community relations between police and their publics play in recidivism. On the subject of at-risk youth, she observed that “there is a lack of trust, [but also] a lack of connection to the forces that should be protecting them.” Lynch stressed the importance of police authentically engaging with teens, such as through role-playing exercises, as a way of “breaking down the barriers that are created by a uniform—whether your uniform is dress blues or baggy pants.”

But Lynch didn’t just reflect on the difficulties of recidivism reform—she introduced legislation to fix it. From the WIF stage, she announced for the first time a new grant program to help communities lower recidivism rates.

“The Department of Justice is awarding $53 million in what are called ‘Second-Chance Grants’,” Lynch said. “These grants will be aimed at organizations in 45 different jurisdictions, [and] focus on things as varied as father and son interaction, job training, education—the many barriers we have seen in the way of people coming out of our prisons to becoming productive citizens again.”

Lynch maintained that the new program is not about rewarding criminal behavior, but rather providing released prisoners the resources necessary to become societal contributors.

“[The Department of Justice is] very involved in fundamental fairness and individual accountability,” she said. “But there comes a time when we have to make a decision as to how [we’re] going to reintegrate those individuals back into our society, in a way that benefits them, as well as keeps our community safe.”