Two procedures caused Elisabeth Rosenthal to realize that the American health care system was broken. The first took place when she broke her wrist in Sweden. In the office of “the fanciest orthopedist in Stockholm” she was handed a $400 bill to the profuse apologies of the doctor. After Rosenthal returned to the US, she went in for a colonoscopy at an in-network hospital. Days later, she received a congratulatory memo from her insurer noting that they had argued her bill down to $9,000.

“This is really crazy,” Rosenthal said. “If we’re paying $9,000 for colonoscopies, we’re all going to be bankrupt pretty soon.”

Rosenthal’s sticker shock inspired her to write a series on the costs of health care for The New York Times. In the comments section of those pieces lived the stories of thousands of physicians and patients who were similarly outraged by their own experiences within the system. Those stories became the foundation of Rosenthal’s first book, An American Sickness: How Healthcare Became Big Business and How You Can Take It Back. She discussed her work at the Aspen Institute with Joanne Kenen, health care editor at POLITICO Pro.

One of the first things that Rosenthal notes in her book is that the American health care system is not a true market. There is no transparency, pricing information cannot be matched to quality, and you have almost no choice when it comes to where you receive care. Yet the focus of the health care debate has been the cost of premiums instead of the rising cost of care. Politicians and insurance companies have taken advantage of this.

“A system that’s driven by finance and profit is much happier to treat a kid with asthma in the ER every month than to go to his home to remediate for mold.”

Rosenthal reminded the audience that insurance companies are part of a for-profit industry that primarily answers to its shareholders. “They’re too big to care about you,” she said. “If claims go up and they can’t raise premiums, they’re going to pass on those extra dollars to you.” This is why many people have seen their deductibles and co-payments rise. In the second half of her book, Rosenthal provides advice to help consumers of the health care system become informed and push back.

Rosenthal believes the health care debate has become a proxy for how Americans perceive the role of government. “If you want to look at this as a business proposition, we’re getting a really bad deal for all the money we’re spending,” she said. Instead of temporary fixes, politicians should focus on sustainable solutions to make our health care system transparent, accountable, and accessible to all. 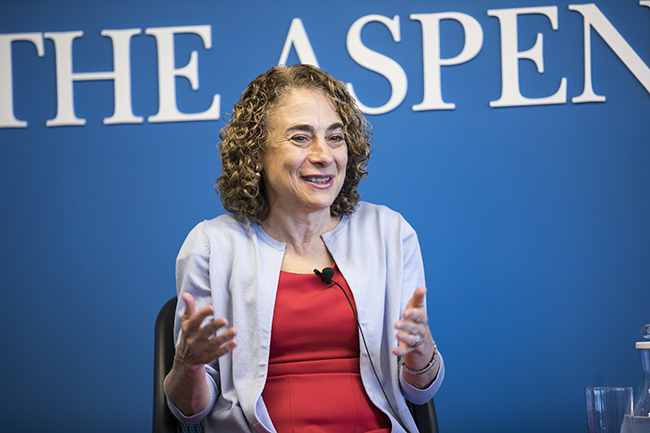