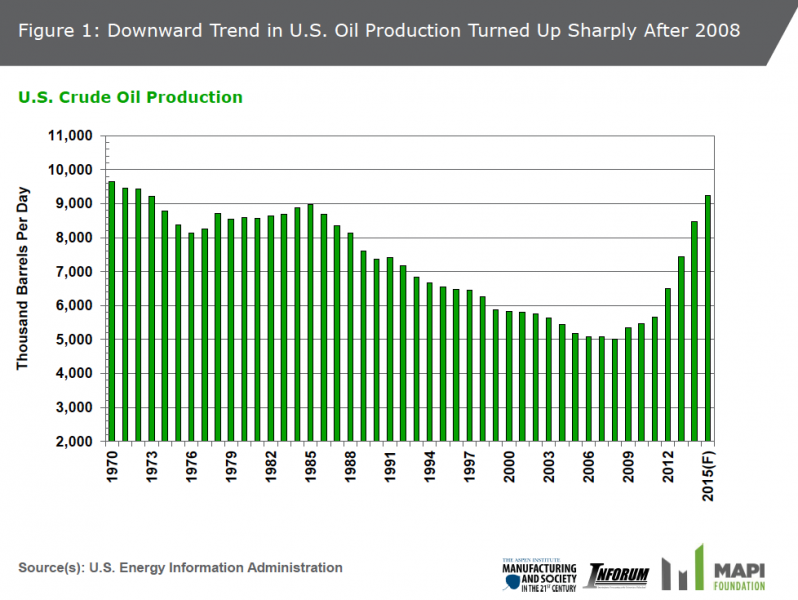 The largely unanticipated boom in oil production in the last five years has revived a debate over whether the United States should reverse the 40-year-old ban on exports of crude oil. Even though we still import around 30 percent of total crude and refined products, the US refinery industry is unable to process much of the new supply of light crude oil produced from domestic light shale formations. In turn, domestic prices for light oil lag the world price and eventually could result in reduced levels of new production. Allowing exports would likely equalize domestic and world prices and also lead to more efficient global processing because many refineries abroad, especially in Europe, can do a better job than their US counterparts. The United States would continue to import heavier grades of crude oil which its refineries are built to process. 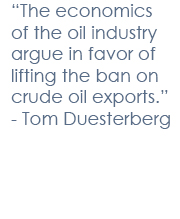 The economics of the oil industry thus argue in favor of lifting the ban on crude oil exports. Many oppose lifting this ban, however, arguing that it will raise prices domestically and diminish the chances of achieving self-sufficiency in supplies of their energy resources. Crude oil and related lease condensates still account for 21 percent of all US energy use. Some industrial users, including prominent energy-intensive companies in sectors such as chemicals and steel, also argue that the current advantage the United States enjoys in oil (and related natural gas) prices would be undermined by exporting oil and consequently weaken one of the pillars of US competitive advantage in world goods trade.

Together with co-authors from the MAPI Foundation and Inforum, I am releasing a paper today analyzing these questions, especially those related to the impact on the manufacturing sector. Using the econometric forecasting tool of Inforum, we found substantial benefit to the industrial economy, to job creation, and to overall US growth from lifting the ban.

Similar to other recent studies on this topic from Resources for the Future, IHS Global Insight, and The Brookings Institution, we think domestic product prices like gasoline will actually see a marginal decline if crude exports are allowed. This is due primarily to the increased production of crude oil in the United States from better pricing for the lighter grades of oil now being unleashed by hydraulic producers. More efficient processing of crude in US and foreign refineries also adds to keeping prices under control.

It is also worth noting that much of the new natural gas from shale and more conventional formations is now “affiliated” with crude oil. Given the higher returns currently available to crude production relative to dry gas, more than 80 percent of domestic drilling is now for crude oil, and gas production derived from crude wells is over 20 percent of total gas being produced in the United States. And natural gas is extremely important as a heat and raw material source for energy-intensive industries like steel and chemicals, so maintaining high levels of production of gas is important to manufacturing.

Our study projects higher domestic crude oil production reaching 3.25 million barrels per day (mm/bd) by 2025 if crude oil export restrictions are eliminated and our “high export” scenario is realized. Such higher production levels flow through to benefit the industrial sector in several ways. Most obvious is higher levels of employment and capital investment in production, transportation, and processing equipment, and the materials such as steel, concrete, and plastics required in this industry. The United States is a world leader in this type of equipment and most raw materials are produced locally. Additionally, the higher levels of production in capital equipment and materials and good paying jobs in drilling, construction, transportation, and engineering related to this industry flows through to higher levels of demand in other sectors of the economy. 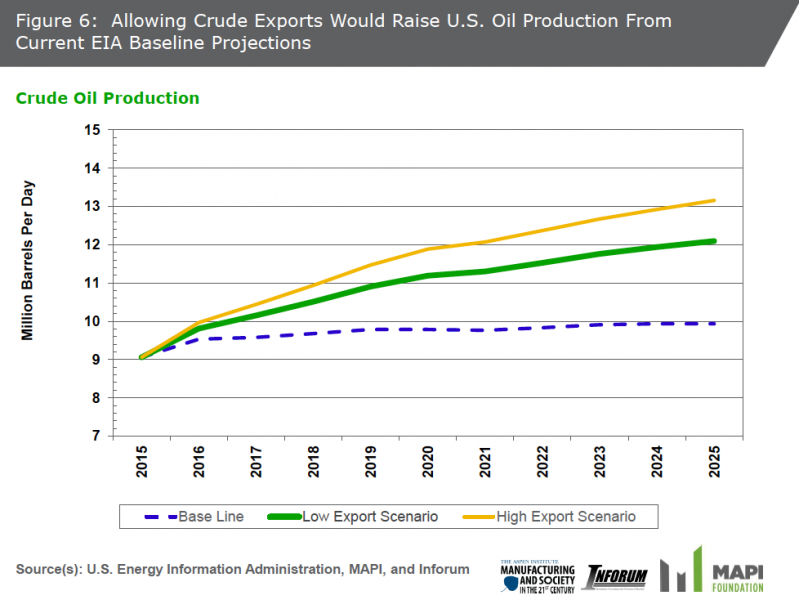 Some specific results of the “high export” scenario are:

A strengthened manufacturing sector is important to the overall health of the US economy for several reasons. Since the end of the Great Recession in 2009, manufacturing growth has outpaced overall GDP. Jobs and benefits in this sector are 9 percent above the national average and many are filled by semi-skilled workers who have otherwise seen their job prospects dim in the last several decades. Manufacturing is still the locus for around 70 percent of privately funded research and development, and much of the patented innovation in the United States, thus helping maintain our global technological leadership.

Finally, the question of energy independence and export controls is often poorly understood. Energy independence ought properly to be understood in a North American context. As the United States increases its production by perfecting new technology, it will move toward more self-sufficiency by incentivizing new exploration and targeting more efficient drilling and processing both at home and with our partners in the North American Free Trade Agreement (NAFTA). Better prices for light crude will move us in these directions. Moreover, banning exports of important raw materials is likely contrary to our World Trade Organization (WTO) obligations. The WTO, for instance, recently ruled against China’s restrictions on exports of “rare earth” minerals. From the perspective of current US foreign policy, opening exports, especially to Europe, which has excess refining capacity, could help offset their dependence on Russian suppliers of oil (and gas). Surely this is an important consideration for the transatlantic alliance. Former US Secretary of the Treasury Lawrence Summers recently offered this assessment of the case for ending the oil export ban:

“The merits [of lifting the outright ban on crude oil exports] are as clear as the merits with respect to any significant public policy issue that I have ever encountered.”

Tom Duesterberg is executive director of the Manufacturing and Society in the 21st Century program at the Aspen Institute.