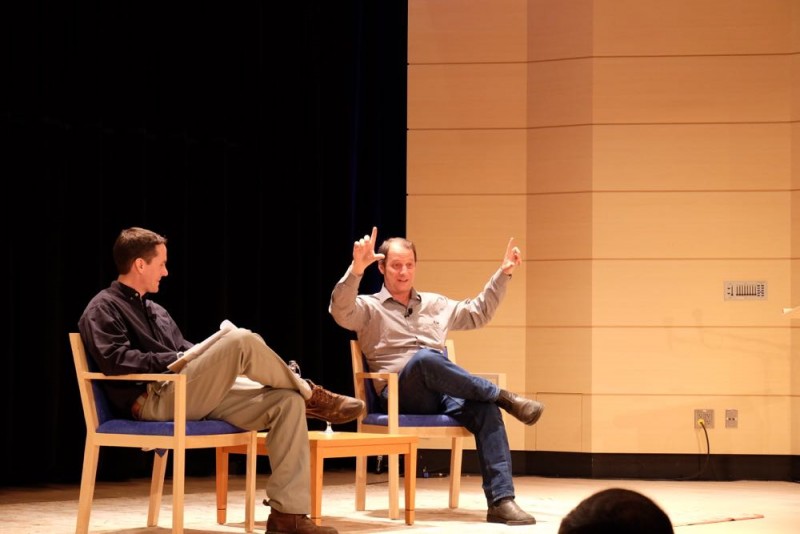 New Yorker staff writer George Packer is the winner of the 2013 National Book Award in Nonfiction for “The Unwinding: An Inner History of the New America.” He reported extensively on the Iraq war, both for the New Yorker and in his 2005 book “The Assassins’ Gate,” which was named one of the 10 best books of that year by the New York Times Book Review. Recently, Packer drew international attention for his response in the New Yorker to the Charlie Hebdo tragedy in an article titled “The Blame for the Charlie Hebdo Murders.”

On a visit to Aspen, Colorado, as the February speaker in Aspen Words’ 2015 Winter Words series, Packer sat down with Aspen Words Creative Director Adrienne Brodeur. Read below for Packer’s take on journalism, writing for the New Yorker, and other highlights from that interview and from his onstage Winter Words appearance in conversation with Aspen Times reporter Andrew Travers.

On writing “The Unwinding”

“When I wrote ‘The Unwinding,’ it was out of a sense of anger and the drift of things, a real sense of affection for my country — which was deepened by the experience of writing the book — and worry, because I had children when I was writing it. I wanted it above all to be a mirror: ‘Here. Look at this. Does this look like us? Is this right? And if so, what does it mean? And what do you think about that? And what do you think can be done?’ I do not have answers in the book… I am not a prognosticator. I don’t think journalists should try to say this is what will happen. What we can say is this is what happened and is happening. The best thing is to leave [the rest] to the reader.”

On what makes for good journalism

“What you’re always doing as a non-fiction writer is editing life into a story.”

“It’s terrible when you, as a journalist, become the subject. It’s happened to some New Yorker writers in famous cases. I think the answer is first of all to know that you are subordinate to the story. You efface yourself to some extent. I think there is an Orwell line in his essay ‘Why I Write’ that for good writing to take place, you almost have to erase your personality. Now obviously that’s not literal because writing is personality, but at the same time, it’s a good maxim because as a journalist, as a non-fiction writer, you really are the window through which the reader is seeing something. If the reader’s focus is on you, I think it’s in the wrong place.”

“My role is like the last dinosaur who wakes up every morning and wonders if his extinction is at hand yet. It’s kind of amazing that I’m still allowed to do what I do… which is to say write at length, take a long time to do it, go underground and not be present in the media for long periods of time, to go into great depth and detail, and then to have readers who are willing to sit down with a 16,000-word magazine article or a 350-page book. The fact that still happens is wonderful and slightly miraculous and tells me something about the true hunger of readers.”

On how a piece for the New Yorker comes about

“I’ll give you the example I’m on now. The Charlie Hebdo killings happened on January 7. I wrote a too-quick — but I think I’d still stand by it — reaction that day, the same day. Then that got a bunch of reaction because it was on the Web and people from around the world could read it. And then my editor said… ‘maybe you should just go to Paris,’ except not really Paris, the banlieues, the suburbs of Paris, where a lot of the social problems of France are concentrated, where France’s immigrant population is kind of almost immured in these giant housing projects, and find out what is going on with so many young Muslim French men and women who feel alienated, a small number of them alienated enough to become jihadists. So that became the new assignment. But it was all very loosely hashed out over a cup of coffee, and then suddenly I’m off to Paris… It’s like, go there and find things. Which is both wonderful license and also frightening, because you’re kind of on your own.”

Barbara Dills is the marketing and promotions manager at Aspen Words.