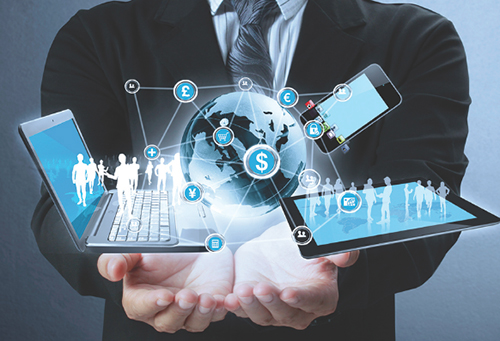 Will Bitcoin and other insurgent currencies on the market reinvent commerce? This and other questions are addressed in “The Weightless Marketplace: Coming to Terms with Innovative Payment Systems, Digital Currencies and Online Labor Markets,” a just-released report that I wrote for the Aspen Institute Communications and Society Program. The report distills the more salient points raised at the three-day 2013 Aspen Institute Roundtable on Information Technology (also known as InfoTech) last August, which brought together leading players in banking, financial services, and online labor platforms.

Most of the conference participants are in the business of inventing or adapting to new types of digital payment systems or data-based services. They include major players like JP Morgan Chase, Intuit, and VISA, as well as upstarts such as Bitcoin, ID3, and the identity-management service Personal.

The basic story in digital markets is the ongoing elimination of “friction” in making transactions — reducing the barriers of geography, time, and transaction costs. Hence the title “the weightless marketplace.” “Reducing economic friction” has been the story of the World Wide Web from its beginnin 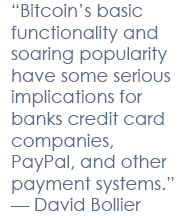 gs, of course, but the trend is now reaching new levels of intensity and disruption. My role, as rapporteur, was to represent the diverse points of view while providing my own interpretive synthesis.

Perhaps the most fascinating points of discussion revolved around Bitcoin. Notwithstanding the controversy surrounding it, Bitcoin’s basic functionality and soaring popularity have some serious implications for banks, credit card companies, PayPal, and other payment systems. Peter Vessenes of the Bitcoin Foundation noted that digital technology can move value to anywhere in the world, at any time, using just 100 bytes of data. And it can do it at very little cost — much less than the per-transaction charges levied by credit cards, for example.

Critics charge that Bitcoin facilitates illicit transactions, money laundering, and terrorist activity, not to mention tax evasion. Vessenes replied that Bitcoin is “way less anonymous than cash” — because the permanent global ledger of transactions for each Bitcoin is accessible and can be used to help identify buyers and sellers. Another reason that Bitcoin is controversial is that it represents a potential threat to the sovereignty of nation-states, because it could undermine their monetary and fiscal policies. That’s why regulation of Bitcoin is inevitable, many agreed.

But apart from Bitcoin’s fate, the larger question may be how existing banks and financial companies will respond to the coming “democratization of money.” Several factors are fueling this trend, according to Gartner, the consulting firm: individual access to massive, high-speed flows of information, the proliferation of mobile computing (smartphones, tablets, etc.), the rise of the cloud, and the social commons of highly specialized communities of interest.

On the one hand, large companies are well-positioned to resist this trend. They are using Big Data to know their customers better and then to “own” them, in the sense of knowing their demographic profiles and having privileged channels for reaching them. Shane Green of Personal.com said that the very design infrastructure of enterprise IT systems tries to lock in a set of power relationships that let the company “control the customer.”

On the other hand, insurgent payment systems reject the idea of anyone “owning” the customer. Green believes that “the customer should own the customer” — meaning, individuals should be able to control and use a complete set of their “small data” (personal information) in commercial dealings. This would reverse the prevailing practice of companies having detailed dossiers on everyone, and users being largely ignorant of who owns and controls information about them.

This happens to be a major goal of the Open Mustard Seed (OMS) platform being built by ID3, as its Executive Director John Clippinger explained. OMS aims to let people control their own data, verify their digital identities independently of banks or other “authorities,” and collaborate and share valuable resources online in trustworthy ways.

But could a novel payment system get a foothold in a world of payments dominated by Visa, MasterCard, American Express, and PayPal? Jack Stephenson of JP Morgan Chase pointed out that more than 200 new payment systems were launched between 1993 and 2000, but “only one has emerged as a standout success — PayPal, with some 86 million accounts in more than 55 countries.”

Yet things may be different now: the feasibility of an alternative currency (Bitcoin) has been demonstrated, and social networking technologies have reached new levels of use. People are extremely connected to the Internet, especially through smartphones, and the incumbent payment systems are heavily invested in centralized, hierarchical systems — and are relative strangers to the dynamics of open networks.

As Vijay Sondhi, head of corporate strategy for Visa, put it:

“When you step through the turnstile at many corporate offices, you enter a kind of ‘Get Smart’ world [a television spy spoof from 1965-1969]. It’s as if you go back 40 years. You are limited in the use of social networking. Evernote is blocked. Dropbox is dropped. Google Docs is blocked. It’s all blocked. The system was architected for security, reliability, and trust, but it wasn’t designed for usability[…]. The legal departments often think social networking is dangerous.”

One wag at his office advised people to BYOD — “Bring Your Own Device.”

Just as distributed money or payment systems may prove to be disruptive, so are the new platforms for online work. Distributed labor markets such as Uber, Lyft, Etsy, Kickstarter, and MakerBot are both opening up new opportunities for entrepreneurs, workers, and consumers while making steady wages lower and more precarious, not to mention without benefits and sometimes without regulatory protections. New online labor markets often bypass existing regulatory protection systems, and so labor standards, minimum wages, and health and safety rules may not apply.

While some of these old regulatory schemes are antiquated and shield incumbent businesses from innovation and competition, it is unclear how certain larger collective concerns — such as privacy, consumer protection, and social inclusion — will be met in the new environment.

David Bollier, the rapporteur of “The Weightless Marketplace” report, is an author, activist, and independent scholar on the commons who blogs at www.bollier.org and cofounder of the Commons Strategies Group, an international advocacy and consulting project.