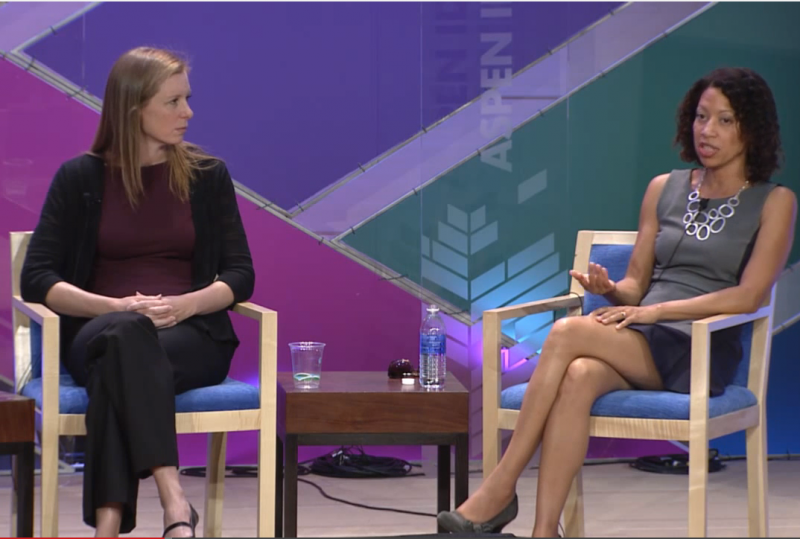 At Facebook and Google, there are thousands of requests to remove content each day, whether it is through a system of flagging something deemed “inappropriate” or at the order of a government. But at the 2014 Aspen Ideas Festival, Facebook Head of Global Policy Management Monika Bickert and Google Vice President of Legal Nicole Alston shared that they have different views of where free speech will be in 10 years.

“I’m cautiously optimistic. I have hope,” Bickert said. “And the reason is: transparency and the growth of the Internet.”

“I think it will be less free, unfortunately, and that’s just basically looking at the trajectory of what governments are doing with their rules and laws applying to free speech,” Alston said. “Given the number of restrictions that are being placed on speech around the world today, it’s actually quite alarming.”

Bickert and Alston joined National Constitution Center President and CEO Jeffrey Rosen to talk about free speech in the digital age, especially regarding their two companies’ roles as gatekeepers of information. For Alston, the biggest threat to free expression comes from governments themselves — which have blocked or disrupted Google’s services in 32 countries.

“A third of Internet users around the world are actually living in countries where filtering is happening very regularly; it’s a part of life there,” Alston said. “They’re criminalizing speech. People are actually taken to jail.”

But many countries have differing value systems — lenses through which art can be seen as pornography, depending on cultural norms. Bickert said Facebook’s policies are made to cover a “broad cultural spectrum” while maintaining some consistency, like not allowing nudity even if it may be considered artistic in some areas.

In many situations, Facebook and Google face difficult decisions of removing specific content that foreign governments find offensive or having the service blocked entirely in those countries.

To view the full session of video, click here.