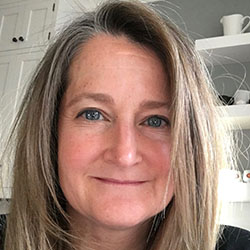 Anne Hawkins is a special projects manager, currently working with the Health Innovators Fellowship at the Aspen Global Leadership Network. She also supported the Aspen Economic Strategy Group for a few months. Prior to that, Anne spent the majority of her 20+ year career at the International Finance Corporation (IFC), a member of the World Bank Group focused exclusively on the private sector in developing countries. During her time at IFC, she led new transactions totaling over $300 million in the financial and private equity sectors in Africa, the Middle East, and Central and Eastern Europe. She was also responsible for managing dozens of portfolio investments, traveled to over 25 different countries, and was based in the field in Johannesburg, South Africa from 2004-2009. She spent her last few years at IFC in a corporate change management role, focusing on client relationship management and incentives, and organizing IFC’s annual global leadership meetings. She took a few years off work to focus on her family and local community, during which she was President and a Board member of the local school foundation. Anne earned an MBA from INSEAD and a Bachelor of Science in Economics from the University of Pennsylvania, Wharton School. Anne lives in Chevy Chase, MD with her husband, daughter and son.