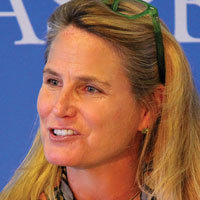 Anne Mosle is a vice president at the Aspen Institute and executive director of Ascend at the Aspen Institute. She is a leading thinker, advocate, and voice in building pathways to opportunity for low-income families and women. With more than 20 years’ experience in policy and philanthropy, Anne has been recognized as Washingtonian of the Year, Ms. Magazine Woman to Watch, and as Visionary Philanthropist. She is also an author of The Shriver Report: A Woman’s Nation Pushes Back from the Brink.

In her current role at the Aspen Institute, she directs Ascend, the national hub for breakthrough ideas and collaborations that move vulnerable children and their parents towards educational success and economic security. Ascend has been a national leader in catalyzing a two-generation approach to breaking the cycle of poverty. Under Anne’s leadership, Ascend has launched a national values-based fellowship program and is investing $1.5 million in promising programs and policy solutions. In all its work, Ascend engages the voices of families and diverse leaders. In 2014, Ascend plans to launch a new two-generation learning network.

Prior to the Aspen Institute, Anne served as a vice president and officer of the W.K. Kellogg Foundation (WKKF), where she was on the executive team and oversaw $140 million in investments. In addition, Anne led the creation of WKKF’s Family Economic Security portfolio, and managed their civic engagement portfolio and the launch of their mission-driven investing program. Before joining WKKF, she served as the president of the Washington Area Women’s Foundation, spearheading seven years of unprecedented growth. She was also the lead architect of their nationally recognized Stepping Stones initiative to build the financial independence of women and families. Earlier in her career, Anne served as senior vice president at the Center for Policy Alternatives, developing leadership and policy programs for state elected and community leaders. She has organized major summits at The White House and 10 Downing Street as well as numerous state and community forums.

Anne serves on the Advisory Committee of the Oxford University Said School of Business and on the National Trustees Council of America’s Promise. She lives with her family in Washington, DC.