On this episode of Aspen Insight, two Aspen Institute experts weigh in on Robert Mueller’s investigation into Russian interference in the 2016 presidential election and the new US tax plan.

from Apple Podcasts | from Stitcher | from RadioPublic

Author Garrett Graff began writing about Robert Mueller before he took over as FBI director in 2001. Mueller filled the agency’s top job just days before 9/11. “I was fascinated,” says Graff, “at how he was the last remaining senior government official in the same job that he had been at on 9/11.” After the terror attacks on the World Trade Center, Mueller continued to lead the FBI for 12 years — longer than many previous directors. Now Mueller is the special counsel investigating Russian interference into the 2016 presidential race. Graff, who penned The Threat Matrix about Mueller’s FBI career, says the special counsel is tackling the probe with the same commitment to the US Constitution that he did at the agency. “I think what you’re seeing play out right now is that Mueller has a very straightforward moral compass. He sees things as black or white, right or wrong, true or false.” Graff is executive director of the Aspen Institute’s Cybersecurity and Technology program. In this episode, he also weighs in on our nation’s biggest cyber threats.

It’s tax season, and Americans have a new tax plan. What does the Tax Cuts and Jobs Act, passed by Congress in December, mean for American families, small businesses, and everyone else? David Mitchell, senior program manager with the Institute’s Financial Security Program, gives his take on who benefits from the new plan. If you get a few extra dollars from the plan, he recommends putting it away. Even with a strong economy, Americans find it difficult to put money in the bank. “Nearly half of Americans report that if they needed $400 in a pinch, they’d have to borrow it or put it on a credit card. They don’t have savings of that amount,” Mitchell says. He gives tips on how to gain short and long-term financial security.

For more information about the topics discussed in this episode, visit the links below: 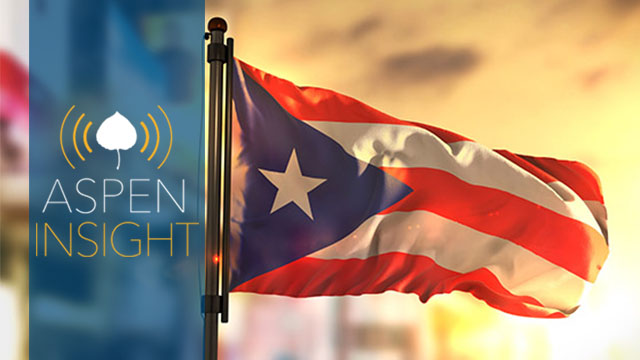 Civic Action
The Struggle for Power in Puerto Rico