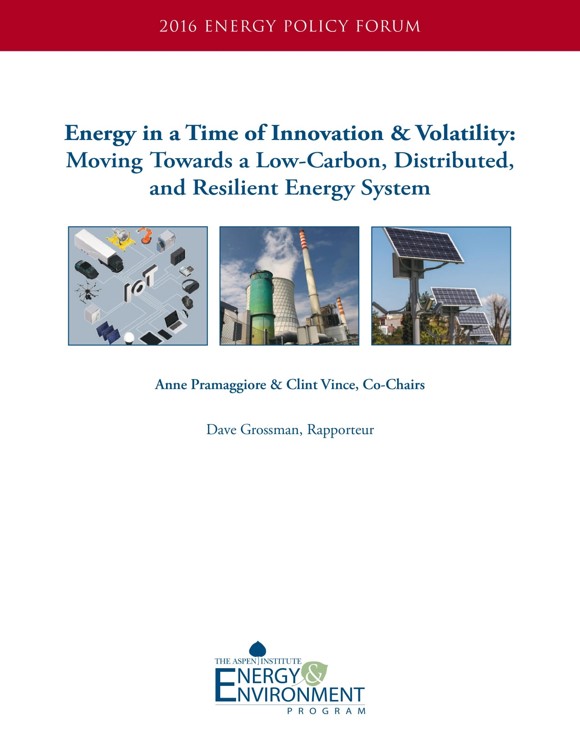 In the United States and around the world, the energy sector is in a period of volatility, innovation, change, and opportunity. In the oil and gas realm, prices have declined precipitously, with ramifications for global supply, though US shale production has been relatively resilient. Oil demand has generally responded robustly to the low prices, but Chinese demand for oil might peak soon – a development that would have been unimaginable a few years ago. As for the global demand for gas, export potential in the US must contend with the abundance of cheap coal around the world and competitive renewables; small changes in gas prices have huge impacts on how natural gas competes with renewables and coal.

There are also several trends affecting the US power industry in particular, including increasing customer choice and demands, growing pressure to decarbonize, more distributed energy resources (DER), flat demand growth, and accelerating technological innovation. Prices for solar photovoltaics (PV), wind, and battery storage are declining rapidly, while energy efficiency technologies such as LEDs are significantly impacting US load growth. There are many regions of the United States where distributed generation is already at grid parity. Increasing digitization of the grid, analysis of big data, and growth in connected devices is beginning to have a significant impact on energy generation, distribution, and use. An additional trend in the energy sector – but by no means limited to the energy sector – is the apparent breakdown in civic discourse in the country, with debates around policies growing dramatic and personal.

Actors in the US power sector are exploring the potential impacts of these trends on rates and utility business models. Some utilities and planners are trying to figure out how to fully integrate DER into planning and operations – and asses the fit between DER attributes and particular grid locations – without disrupting the provision of safe, reliable, affordable power. Rate design has to focus on integrating the entire suite of DER technologies (not just rooftop solar) in ways that fairly compensate all parties for the value they provide to the grid, while also addressing issues of equity and providing adequate support for grid maintenance and upgrades.

Time-of-use rates and other kinds of price signals can incentivize behavioral change, but technology tools may be needed to automate responses and help shift and reduce energy consumption. Utility business models, meanwhile, may need to (and, in some places, are beginning to) shift, with some functions (e.g., grid construction, maintenance, operation, and planning) remaining regulated utility functions while others are opened to competition. Some utilities are considering a platform model that would have them serving more as network operators enabling interactions among various parties. California, as is often the case, has been at the forefront of “the future”, pioneering business models and procurement efforts involving DER, storage, and clean energy.

Climate change is only one of many drivers of the various trends and transformations affecting the energy sector. The list of ways to reduce carbon emissions from energy is fairly short. The options are basically: (1) conservation and energy efficiency; (2) reducing reliance on fossil fuels or substituting them with lower emitting ones; (3) carbon capture, storage, and utilization (CCSU); and (4) zero-carbon energy displacing other dispatch. Currently affordable options include energy efficiency, utility scale PV, and wind, but a range of technologies will likely have to play a role in achieving a low-carbon future, including hydropower, energy storage, nuclear power, power management, and improved efficiencies and CCSU for the existing global fleet of fossil fuel plants. It is important to get both long-term and short-term emission reduction efforts right, but there is no Gantt chart of deep decarbonization steps that considerable could help identify priorities and solutions across timelines. It is also important to recognize that the transformation is not inevitable; policies at all levels of government have played and will continue to play a critical role in driving greenhouse gas reductions, including efforts to advance grid integration, grid infrastructure, and sustainable transport options at a pace and scale that matter.

Developing a modernized, integrated grid capable of delivering (two-way) distribution is equally important from the perspective of resilience and security and may produce larger efficiency gains in infrastructure than any single investment. Whether focused on extreme weather events, physical attacks on infrastructure, cyberattacks, or some unforeseeable “black swan” events, security and resilience are of growing concern in the energy sector. Energy companies need to prepare as best they can, working through scenarios, instituting policies to guard against internal and cyber threats, and developing crisis response plans – though efforts may be better spent on boosting system resilience and restoration than on up-front security. Similarly, resilience has to be incorporated into the way the grid as a whole is built and operated, which could include microgrids, storage, fewer big critical substations, greater redundancy and optionality, and reserves of critical equipment such as transformers. This more decentralized, modular way of running the grid means that an event can be more readily isolated, cascading problems can be avoided, and restoration of power to smaller nodes of the grid can occur more quickly. Numerous government standards and voluntary collaboratives have been established to promote grid security and resilience, information sharing, and threat response.