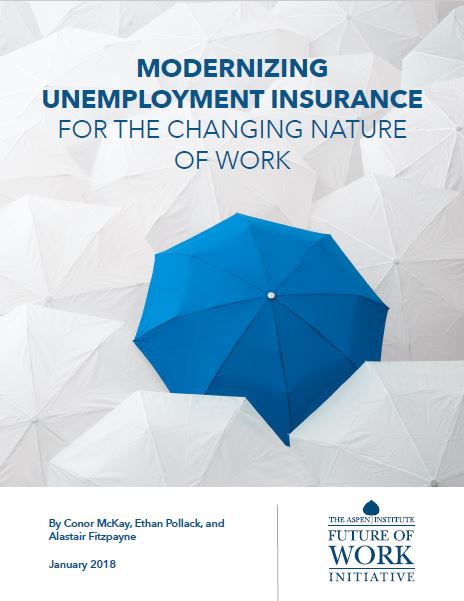 Created in 1935, Unemployment Insurance (UI) is a central pillar of the social insurance system for American workers. The UI program — which is overseen by the U.S. Department of Labor and administered by the states — collects payroll taxes from employers to insure workers against unexpected job loss. Eligible workers who become unemployed through no fault of their own can receive temporary income support while they search for reemployment. In 2016, the program paid $32 billion to 6.2 million out-of-work individuals.

UI is one of America’s most important anti-poverty programs for individuals and families, serving as a key counter-cyclical stabilizer for the broader economy. In 2009, the worst year of the Great Recession, the UI program kept 5 million Americans out of poverty, and prevented an estimated 1.4 million foreclosures between 2008 and 2012. During the Great Recession, the entire UI program — including normal and extended unemployment benefits — created roughly two dollars of economic activity for each dollar spent, and closed nearly 20 percent of the gap in real GDP caused by the Great Recession.

Despite UI’s history of helping workers weather difficult economic times, labor market changes require policymakers to enact reforms that strengthen its ability to protect them in the 21st century. UI was designed to insure traditional, full-time workers, and to help them return to traditional, full-time work. But today, growing numbers of Americans are working in non-traditional jobs. Growth in non-traditional work has contributed to a long-term decline in the percentage of unemployed workers eligible for UI. With automation and globalization threatening major disruptions in the job market, policymakers should strengthen the UI program now, while unemployment is low and the economy is strong, so that it is better able to help both traditional and non-traditional workers who lose their jobs in the next economic downturn.

The first section of the paper reviews changes in the labor market since UI was created. Although most workers still have traditional full-time jobs, the prevalence of non-traditional work has increased. Non-traditional work includes self-employed, independent contractors and freelancers who operate outside formal employer employee relationships. Other types of non-traditional arrangements include temp agency workers, on-call workers, contract company workers, multiple jobholders, and part-time workers. These arrangements can be structured as W-2 employment, yet do not provide traditional, stable full-time work. While non-traditional work can provide increased flexibility, it can also heighten job and financial insecurity, and can leave workers without access to critical employment-based benefits and protections.

The third section of the paper discusses the opportunity to use non-traditional work to help unemployed Americans return to the labor market. Most states generally require UI recipients to seek traditional full-time work in order to continue receiving benefits, even if their original jobs were part-time. Very few states offer Self-Employment Assistance (SEA) to help UI recipients become entrepreneurs. Further, there are structural incentives that discourage regional workforce offices from helping workers find and prepare for non-traditional work.

The paper does not include proposals for improving the solvency of state UI trust funds, as it focuses on reforms to broaden eligibility for workers in non-traditional work arrangements. However, the authors strongly support improving solvency as an important goal of any UI reform effort.

The proposals to modernize UI represent ideas from across the political spectrum. While more research and pilot projects are needed to assess their effectiveness, we hope their inclusion in the paper will advance the conversation about how to update the UI program and help workers adapt to the rapidly changing economy.