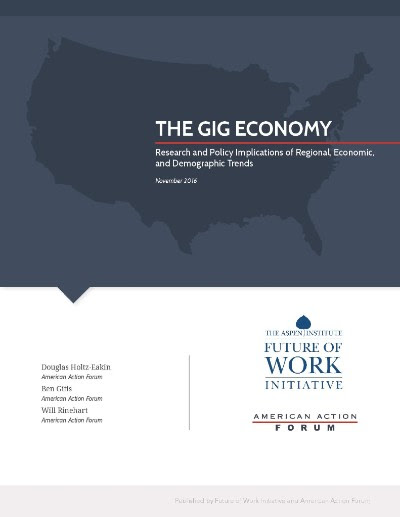 This report was produced by the American Action Forum in collaboration with the The Aspen Institute Future of Work Initiative.

Over the past few years, policymakers have grappled with the policy implications of the so-called “gig economy.” This paper adds to the small but growing literature by examining regional, economic, and demographic trends in the gig economy and its workers.

To do so, we use the General Social Survey (GSS) to construct three measures of gig economy workers:

Our results suggest some fruitful avenues for further research. First, the role of gig economy employment in cyclical recoveries stands out as an important issue for understanding overall employment patters, labor supply among couples, and the economic well-being of gig employees. At the same time, the regional differences unearthed in these data merit further documentation and understanding. What, for example, is the role of state-level policy in generating these trends?

These findings suggest a stance of forbearance by federal policymakers. The nature of employment and economic well-being patterns is sensitive to data definitions – always an indication that drawing bright policy lines is a problematic endeavor. It also suggests that there may be a role for federalizing the gig economy policy response.